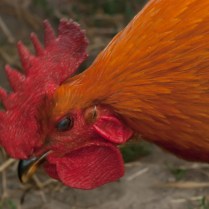 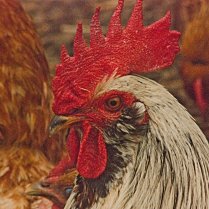 I was out on Sauvie Island last week, picking Raspberries for this years crop of Raspberry Jam. After picking nearly 10 lbs, of Raspberries, I was walking back to the main house on the farm and found these guys roaming about. They were very photogenic and fun to create some cool images with.

A rooster is a male gallinaceous bird, usually a male chicken. Also known as a cockerel or cock, they claimed the name of Rooster by “Roosting” or perching to sleep at night, an act actually done by both sexes. The Rooster is polygamous and attempts to watch over his hens by roosting about 5-6 feet above ground. While famously known as a crower at dawn, some roosters actually crow throughout the day, depending on personality. To check out the varied usage of Roosters in Spiritual activities, check out the wikipedia page to learn more.

Thanks for stopping by this week, be sure to share this post with your friends and connections.