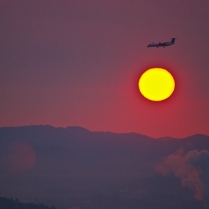 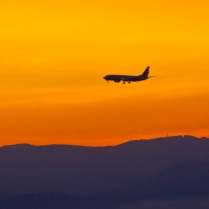 I want to present what I think are some pretty cool images of aircraft on arrival to PDX Airport in Portland, Oregon. These images were created throughout the year 2012 while I worked on my Sunrise Series. For more images of Portland Sunrises visit the three posts listed below.

The first image was created on August 12, 2012. That summer morning was hazy in the Columbia River Gorge due to all the Wildfires happening in Southern Washington State and Central Oregon. It made for some natural filtering of the sun after rising above the horizon.

The second image was created on May 14, 2012, before the wildfires on the Summer, and on a beautiful golden Sunrise morning.

The third was created just 3 days earlier. This was a time of year when we received quite a few golden Sunrise mornings. Providing some spectacular contrast to the blue of Mount Hood.