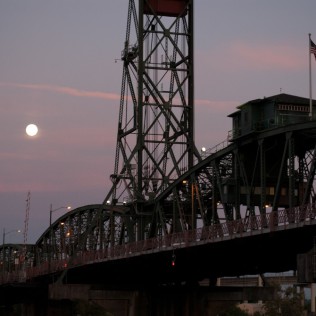 Here’s a great example on how images can be manipulated now a days! Not complaining about it, just find it fascinating the creations that can be found out on the Internet.

The first image is the original image I created one night out on the Downtown Portland, OR Waterfront. It was taken the night before the big Super Moon this past Summer. That night I also found an up close image of just the moon, which can be found in a previous post – Supermoon in Portland, Oregon. Or, at least, as close as I can get right now, with my 300mm zoom lens.

So, the Moon can be seen from this particular perspective, but I wasn’t happy with it’s size in the first image, so, in a short session of Post-Production I super-imposed the up close Moon into this image directly over the original Moon position and found a much more dramatic image. What do you think? Which image do you like better?