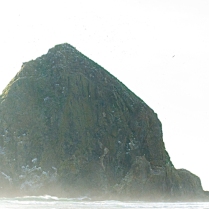 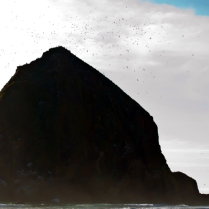 Haystack Rock is located barely off the coast in Cannon Beach, OR. A sleepy, artsy, tourist destination for many folks, Haystack Rock, just may be the only reason people visit. It’s no doubt the most photographed beach rock in Oregon. The city’s namesake comes from the fact that a wrecked ship’s Cannon was found on the beach, way back in 1846. These images are a little different from many you might find. They day was really sunny, and we held out all day for a cool sunset, but that never came. Or, at least, it came a little differently then what I was hoping for. The rock use to be climbable, but has since been closed off to the public, with the exception of the base. Above is a sanctuary for many seabirds, including terns, gulls, and puffins. Occasionally, these birds get visited by an eagle or two and things get a little riled up. That’s what happened in the first and second images, but unfortunately, the first image you can’t tell. But all the birds flying around the rock in the second image are flying to escape the predatory nature of a larger bird looking for dinner. The third image was taken at sunset, the best we could get since the clouds off the coast were very thick.

I hope you enjoyed this post, please share with your friend and connections. Let them know how awesome this blog is.