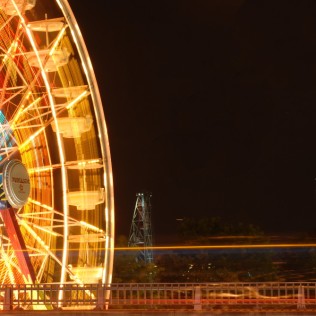 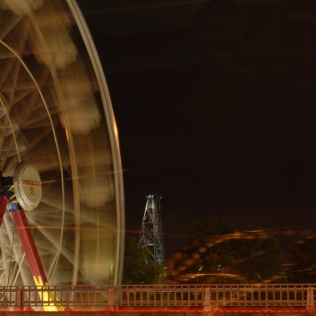 The carnival is in town!

As part of the annual Rose Festival in Portland, Oregon, the carnival sets up on the Waterfront along the Willamette River in Downtown. Lot’s of opportunity for the novice photographer to practice night lights photography. I missed out being able to go last week, the first weekend of the festival, I made doubly sure I could get out there last night. I found over 230 images from many different perspectives. You’ll get a chance to see some of these image in the coming weeks, but for now here are the last two images I took last night. I closed the carnival down! I couldn’t stop, I felt like an addict! Every time I thought to myself, “okay, that’s enough for tonight” another idea would come to mind and before I knew it, 30 minutes would pass by. I think the only thing that was going to get me to stop, was to shut it all down. The Ferris Wheel is set up right next to the Morrison Bridge. And that’s the Hawthorne Bridge in the distance of these two images. The blurred lights at the bottom are vehicles passing by getting onto and exiting the Morrison Bridge, where I and many other photographers set up our tripods and cameras.

I hope you like these two different perspectives. Be sure to share with your friends and connections.