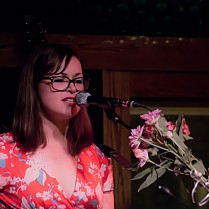 This week I want to present some images that were created at Jon Ransom‘s Album release party that took place at the Alberta Street Pub in Portland, OR on February 19th, 2015.

Small Souls played that night too. I’ll present some images of them playing at the show next week.

This is the first part in a series of posts that I’ll present over the next couple weeks and created at this show. This first post features images of the male/female duo Towns and Villages. Chelsea McAlister and Mike Apinyakul make up the members of this duo and their brand of music is described as “Whiskey Soaked Country and Americana Duets.” They are somewhat new to the music performance scene, so there’s not a lot out there right now for your musical enjoyment, but be on the lookout for this great duo. In the mean time enjoy these great images.

One challenge there is with photographing musicians while performing, catching them with their eyes open. If you can get over the fact that the eyes are closed in these images, you’ll see some coolness to them.