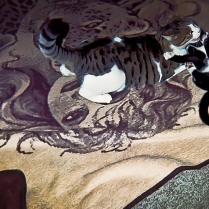 My friend and roommate, Sinatra, transitioned on Sunday, Nov. 9th, 2014. In memory of this great cat, I am posting an image and a story of his life every day for a week, to honor this great cat! This is part 4 of a 7 part memorial series.

After living in Arcata, CA we lived in Eureka, CA for a period of time. I didn’t like Eureka, CA but tolerated it for a while before ultimately moving to Portland, OR. It was close to work, but still a little too urban. Sinatra’s running around space dramatically lessened from the previous two forests where he use to live. But still he had access to outdoors, and opportunities to develop relationships increased. Sinatra was around 5 or 6 years, 3 years living together.

The neighbor cat was this cute little black kitten with a white speck on it’s neck. He liked to dart around everywhere, thus earning him the nickname Turbo. Couldn’t have been more than 4 months old before it’s human was letting him go outside. Well, he almost immediately met Sinatra with both of them traversing the same small territory. But, instead of fighting they started playing with each other. I would witness the two of them running across the long yard in front, chasing each other across the length of the yard, Turbo running behind, and catching up to Sinatra, then Sinatra would dive head first into the grass and the two of them would roll together, head to tail, to a stop. It was loads of fun to watch, it blew my mind the first time I saw it! The two of them. There were many a day when I’d come home from work to catch the two of them laying in my chair in the front room, together, dozing on a lazy afternoon. It was almost like Sinatra was mentoring Turbo. But alas, Turbo had to move away. It would have been nice, I think, to see where Sinatra and Turbo’s relationship would have gone, but alas, it was just Sinatra. These pictures are old school photography, taken with a disposable camera, not the best quality, but you get the idea of what it was like living with Sinatra and Turbo.

One reply to “Farewell to a Great Cat, Part 4”