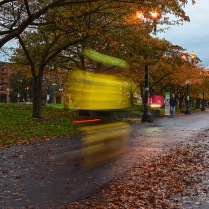 Just in time for All Hallows Eve!

Here are some interesting images I found along the Portland Waterfront last week. I wanted to capture the cherry blossom trees between the Burnside and Steel bridges along the Willamette River in the early morning light. In the Spring, these trees a littered with pink blossoms and there are a ton of images out there depicting that. But in the 10+ years I’ve lived in Portland I never noticed the colors during the Autumn, or the Second Spring. The day before these images were created I was taking the off ramp from Interstate 5 into the Central Eastside business district, which features spectacular views of Downtown Portland, and noticed all the colors along the waterfront. I made a mental note, you have to get out there for some images. The following morning, I did exactly that. Little did I know how busy it is with bike commuters and others in the early morning hours? They make for the perfect ghost images and ample opportunity for action shots with some fantastic color behind the ghosts. I particularly liked it when someone rode by in a yellow rain slicker because the colors match the trees perfectly.

I never believed much in ghosts! I’ve never seen one, so it’s difficult in my mind to believe something that I’ve never seen? I’ve wanted to believe. I think it would be cool to see something that’s not really there and to be able to study or to try and communicate with it. But I’ve yet to be afforded that opportunity. Maybe one day I’ll get that chance. But until then, it’s difficult for me to fully comprehend the thought.

Any who! It is my desire that everyone have a great Halloween season. Hope to see some great costumes out there, and perhaps a ghost or two? Be safe and be careful with all that sugar and candy bounty that you’ll pull in tonight.