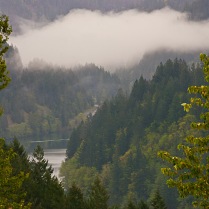 Okay, so I was supposed to post this series of images last Summer, soon after I posted my Washougal River post from last year. But I got sidetracked and to be honest I didn’t think these images that I found out on the Clackamas River weren’t as spectacular? But I’ve decided to post anyway, since I haven’t posted at all this month, I wanted to get something out there.

The Clackamas River feeds into the Willamette River in Oregon City, after traversing out of the Cascade foothills Southeast of Portland, OR. It’s a beautiful river, but was probably once even more grand before Portland General Electric came in and built dams to provide power to the growing city to the North. The valley hasn’t been logged very much recently as compared to along Highway 26 out to the coast. It was logged long ago, and the second growth forest is coming in nicely. Hopefully they won’t log again for a long time to come.

I also wanted to say that I updated my last Feature Artist post featuring some commentary about the pieces I posted images of from the artist himself, Jan Shield. Check out the link and some great fine art.

One reply to “Clackamas River”